Turkey’s geographical position and the long history of its lands resulted in it to be a meeting point of various food cultures, making food tasting in Turkey a unique and unforgettable experience. This is why a question like “What is a typical Turkish food?” is difficult to answer. Let’s start with an overview of different types of cuisines that are in Turkey.

Istanbul: Also known as the Ottoman cuisine or the Palace cuisine, this cuisine is known as one of the richest in the world. It has been influenced mainly by the Balkan, the Anatolian, the Syrian and the Caucasian cuisines. Unfortunately, most of the recipes didn’t survive, as they were kept as secrets by the cooks. So what we know today is only a small selection. It is known that especially meat and desserts were dominating. Starters were not typical, and tomatoes were also introduced much later so that the Ottoman cuisine doesn’t use tomatoes or tomato marks. Some impressive food that still can be found in restaurants are:

Desserts were always essential in Ottoman cuisine. It is known that at a festive event in the 16th Century, there had been 53 sorts of sweets for the guests. Still popular desserts are: 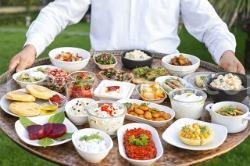 Izmir and the Aegean Coast: The Izmir and the coastal cuisine have a lot common with Greek cuisine. Most names can be found in both languages, like dolmadakia (GR) – dolma (TR), keftedes (GR) – Kofte (TR), moussaka (GR) – Musakka (TR), etc., and they are very similar.
Typical for the Aegean cuisine is to start with a variety of cold dishes, called Meze. These are small dishes with yogurt, fish, eggplant, cauliflower, and much more. In a typical restaurant, you wouldn’t choose your meze from a menu. Either the waiter would bring a big tray with a variety of mezes to your table, which you can directly pick, or you would go to the glass fridge with the waiter and tell him there.
Vegetables are also essential in Aegean cuisine. There are many recipes with vegetables cooked with olive oil that can be consumed cold or warm.
Fish is another essential food for the Aegean. Especially grilled fish are common. It is typical to choose your fish, not from the card, but going to the glass fridge with the waiter. He would weigh the fish there, tell you the price, and ask you how they should prepare it. 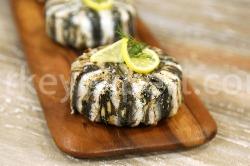 Coming to the soul of the Turkish cuisine: Gaziantep. Gaziantep is located in the South-East of Turkey and can be reached by a 1h 45m flight from Istanbul. It has its unique cuisine influenced by the years of history of the area and is a favorite location by gourmets. Many dishes not to miss in Turkish restaurants meanwhile originate from here. Due to its gastronomical importance, Gaziantep has been added to the UNESCO's Creative Cities Network in 2004.

Especially in Istanbul and in Izmir, you will find many fusion restaurants that are combining different food cultures, making your experience even more intense. 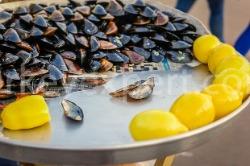 Besides these varied cuisines, there is a excellent Street food culture in TurkeyDoner – Doner is meanwhile everywhere and is known by everyone around the world. In Turkey, you can easily find a “donerci” when you’re hungry, without searching too long.

Kumru – This is a typical street food from Izmir. It is a grilled sandwich with spicy sausages, sausages, pickles, tomatoes, and grilled cheese.

Boyoz – Another typical Izmir street food. Boyoz is a pastry with tahini and is very popular.

Kumpir – These are baked potatoes with butter, cheese, and a variety of toppings

Balik-Ekmek – A typical street food from Istanbul. Balik-ekmek means fish and bread, and this is also what it is. You can find many small tents on the coast or fisher boats, selling grilled or fried fish sandwiches. Usually, there is a garlic sauce with it.

Simit – This is a circular bread with sesame seeds. The simit in Istanbul tastes slightly different than the simit in Izmir. In Izmir, they call simit also gevrek.

Midye dolma – These are rice-stuffed Mussels and can be found in restaurants but also on streets in trays. You would start eating, and the seller would count the shells at the end to tell you the price. Don’t leave Turkey without having tried midye dolma.

Resources
Why Turkish Lira is falling and how it'll affect the property prices in Turkey
Frequently asked questions about buying property in Turkey, residence and citizenship
Buying properties on the Asian side of Istanbul
Istanbul Moda
Top spots to visit during your first travel to Istanbul
Turkey records the highest increase in housing prices during 2021
Antalya Muratpasa, the central district for buying property in Antalya
Kocaeli Izmit, an alternative location near Istanbul
Karakoy, where ancient times meet modernity in Istanbul
Izmir Alsancak
How to spend a perfect summer in Istanbul?
Bomonti, The neighborhood that never sleeps
The Hidden Treasures of Istanbul
Investing in Turkey; Reasons, Incentives and Sectors
International Schools in Istanbul
What does 2+1 mean on Turkish apartment advertisements?
Best Istanbul Marinas
Turkey to Resume Flights: Here's what you should know
Best shopping malls in Istanbul
Traveling to Turkey Post COVID: What You Should Know
International airports in Turkey
Istanbul Canal and Istanbul Real Estate
Why invest in Kusadasi
Emaar Istanbul
Banks in Turkey
Which countries can I visit visa-free with a Turkish passport?
Public transportation in Istanbul
A Short History of Kusadasi
Change in the law concerning foreign landowners in Turkey
Traveling to Turkey tips and advice
Food culture in Turkey
Activities in Kusadasi
Hair Transplant inTurkey
Starting your own business in Turkey
Published on 2019-10-25
Updated on 2019-10-25
Search