A Short History of Kusadasi 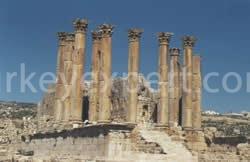 Even though not 100% for sure, it is believed that early settlements in Kusadasi were by the Lelegians and Carians who moved from the central Anatolia around the year 3000 BC. They established a colony on the outskirts of Pilav Mountain in Kusadasi. Mild climate allowed the inhabitants to grow essential products such as olive, grape, and figs for extracting oil or making wine and sweets on the fertile lands around the city. 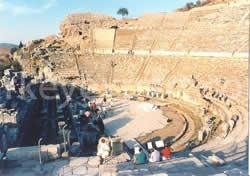 In the 10th century BC 12 Ionian Cities -Samos, Khios, Miletos, Priene, Ephesus, Teos, Erythrai, Priene, Klazonemi, Lebedos, Phokaia, Colophon, Smyrna, were established and were known for the most developed cities of the age. The annual meeting place of the Ionian League, Pannonian, was founded around Kusadasi; and the towns of Phygale, Marathesion and Neopolis were established within the borders of the city. 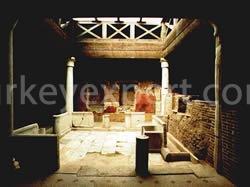 Persians around the year 546 BC invaded the city. In 200 BCE, Kusadasi and its environs were dominated by the Roman Empire. As the changes in climate caused severe earthquakes and changed the route of Caystros River, Ephesus was mostly destroyed and lost its prior importance. Byzantines now was forced to search for a new port and a new road that would be suitable for trading. Scala Nuova was the name of this new port, which added a new trading center to historical cities such as Ania, Melia, Phygale, and Neopolis, which have created the early foundations of today's Kusadasi. By the 15th century, Scala Nuova was under the domination of the Venetian and Genoese sailors and traders who established consulates here. 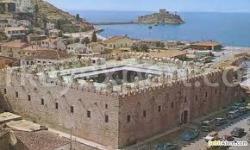 The advantageous position of Kusadasi along essential trade roads, such as the Silk Road, influenced the development of the city as a center of trade.

The Ottoman Empire ruled Kusadasi after 1413. During the reign of Ottomans, significant new structures were built in Kusadasi. Okuz Mehmet Pasa Caravanserai is the principal legacy of the Ottoman architecture in the city and had been ordered by the man of the same name, who was the vizier during the reigns of Sultan Ahmet I and Osman II. Also, the mosques in the center of Kusadasi and the castle on the Pigeon Island are reflecting the architectural style of the era. 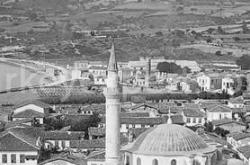 After the First World War, Kusadasi was invaded by the Greeks (1919). The city won a long struggle and on September 7th, 1922, and became a part of the Turkish Republic.

Today Kusadasi, one of Turkey's principle holiday resorts, offers an excellent environment for an unforgettable holiday. Situated on the west coast of Turkey- 90km south of Izmir, Kusadasi is known as for one of the most attractive cities of the Aegean, as it is close to important historical sites including Ephesus, Didyma, Priene, and Miletos.

Some of the historical places in Kusadasi are listed below.

Ephesus was the capital of proconsular Asia, which was the western part of Asia Minor. It was colonized principally from Athens. In the time of the Romans, it bore the title of "the first and greatest metropolis of Asia." Ephesus was famous for possessing the Temple of Diana, the chief shrine to this pagan god, which was also considered one of the Seven Wonders of the World. The city was additionally known for building the largest outdoor theatre in the world, capable of containing 50,000 spectators. The theatre exhibited the fights of wild beasts.

In Kusadasi, you will find many daily tours to Ephesus, or Kusadasi-Selcuk minibusses will take you to the entrance of Ephesus, where you can buy a guide and explore the ancient city on your own. Places to see are Temple of Artemis, Library of Celsus, Terrace Houses, Commercial Agora, the Theatre, The Arcadian Street, Baths of Scholastika, Baths of Varius, Church of Saint John, Fountain of Trajan, Harbour Baths, Marble Way…

Below is a small selection of places to see in and around Ephesus.

Temple of Artemis - Considered one of the seven wonders of the ancient world, Ephesus' Temple of Artemis was dedicated to the goddess of the hunt. Only the foundation and one column remain of this temple, which once measured 425 ft long, 220 ft wide and 60 ft high.

Library of Celsus - Originally built in 115-25 A.D., this restored facade is a highlight of the ruins today. This style is believed to be the standard architectural form for Roman libraries. The interior measures 70 by 80 feet and held approximately 15,000 scrolls.

This library was dedicated to Celsus, the proconsul of Asia, and his sarcophagus was located under the apse. 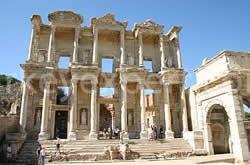 Terrace Houses - From the time of Augustus, these dwellings of wealthy Ephesians were decorated with beautiful frescoes and mosaics. The houses had luxurious bedrooms, bathrooms, triclinium, and kitchens.

Built against the mountain south of Ephesus, the roof of one house forms the terrace for the house above it. These houses were inhabited until the 7th c. A.D. 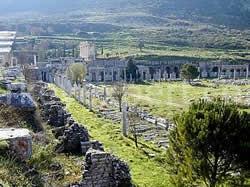 Commercial Agora - This market area is known as the "Square Agora" because of its dimensions 360 ft square. It arose in the Hellenistic period and was surrounded by arched shops about 40 ft deep. It is located next to the harbor and was the city's main commercial center. 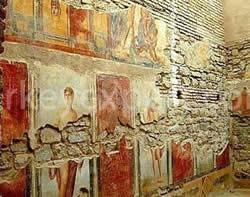 Ephesus Theatre - Originally holding 25,000 people, this theatre was built in the Hellenistic period and was renovated by several Roman emperors. Designed for theatrical performances, later alterations allowed gladiatorial contests to be held here. Today, it welcomes artists from all over the world for unforgettable concerts (Elton John, Sting, The Scorpions, Joan Baez, etc.) and operas and ballet. 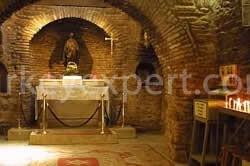 House of Virgin Mary - Located on the top of the "Bulbul" mountain 9 km ahead of Ephesus, the shrine of Virgin Mary enjoys a marvelous atmosphere hidden in the green. It is the place where Mary may have spent her last days. Indeed, she may have come in the area together with Saint John, who spent several years in the area to spread Christianity. Mary preferred this remote place rather than living in a crowded place. The house is a typical Roman architectural example, entirely made of stones. In the 4th century AD, a church, combining her home and grave, has been built. 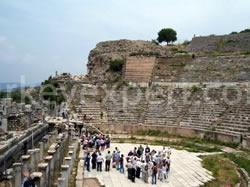 The Seven Sleepers - According to the story, during the persecution of Christians (AD 250) under the Roman emperor Decius, seven (eight in some versions) Christian soldiers were concealed near their native city of Ephesus in a cave to which the entry was later sealed. There, having protected themselves from being forced to make pagan sacrifices, they fell into a miraculous sleep. During the reign (AD 408–450) of the Eastern Roman emperor Theodosius II, the cave was reopened, and the Sleepers awoke. The emperor was moved by their miraculous presence and by their witness to their Christian doctrine of the body's resurrection. Having explained the profound meaning of their experience, the Seven died, whereupon Theodosius ordered their remains to be richly enshrined; and he absolved all bishops who had been persecuted for believing in the Resurrection. 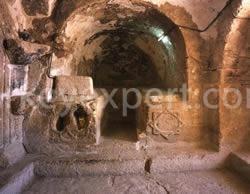 Sirince Village - This pretty old Orthodox village, 12 km away from Ephesus and 30 km from Kusadasi, was once Cirkince ("ugly"). Indeed its habitants gave this name on purpose as they did not want to be bothered by foreigners nor to share the beauty of their village.

Still, after years, visitors understood that the village was not ugly at all and called it Sirince ("pretty"). As the town is located on the top of a mountain, anyone will enjoy the impressive wine yards and peach trees' views on his way.

Today the village is a perfect synthesis of Turk-Greek culture as of the 1920s: after the Independence War, people exchange between Greek and Turks has occurred, and all those typical Greek houses, though they kept their original outside characteristics, have received the local layout inside. The most beautiful specimens are open to visitors. And even in the courtyard of one of them, one will discover a nicely restored Orthodox church.

While you are in Sirince, don’t forget to taste their homemade wine sorts, which generates the primary income of the little village.

Resources
Why Turkish Lira is falling and how it'll affect the property prices in Turkey
Frequently asked questions about buying property in Turkey, residence and citizenship
Buying properties on the Asian side of Istanbul
Istanbul Moda
Top spots to visit during your first travel to Istanbul
Turkey records the highest increase in housing prices during 2021
Antalya Muratpasa, the central district for buying property in Antalya
Kocaeli Izmit, an alternative location near Istanbul
Karakoy, where ancient times meet modernity in Istanbul
Izmir Alsancak
How to spend a perfect summer in Istanbul?
Bomonti, The neighborhood that never sleeps
The Hidden Treasures of Istanbul
Investing in Turkey; Reasons, Incentives and Sectors
International Schools in Istanbul
What does 2+1 mean on Turkish apartment advertisements?
Best Istanbul Marinas
Turkey to Resume Flights: Here's what you should know
Best shopping malls in Istanbul
Traveling to Turkey Post COVID: What You Should Know
International airports in Turkey
Istanbul Canal and Istanbul Real Estate
Why invest in Kusadasi
Emaar Istanbul
Banks in Turkey
Which countries can I visit visa-free with a Turkish passport?
Public transportation in Istanbul
A Short History of Kusadasi
Change in the law concerning foreign landowners in Turkey
Traveling to Turkey tips and advice
Food culture in Turkey
Activities in Kusadasi
Hair Transplant inTurkey
Starting your own business in Turkey
Published on 2019-12-13
Updated on 2019-12-13
Search